With 2014 just barely holding on to dear life before it disappears into the history books, we have Episode IV in our Camera Price Charts mini-series, focusing on Serious Fixed Lens cameras, with Prime or Zoom lenses. This covers many but not all cameras with RAW (there are many and more these days, even a few cameraphones support RAW one way or another). In Part #1, we looked at the prices of 35mm Full Frame Cameras. In Episode II, we stopped down to APS-C DSLRs, while in Episode III, we threw away the mirrors for a look at Mirrorless Camera prices. To see the charts at a bigger size, “View Image” in browser.

Methodologie
The prices are a consensus between B&H Photo and Amazon and Adorama as of December 31 in 2014. These are new condition with USA warranty prices, in-stock or (pre)orderable from authorized dealers (iffy and unauthorized dealers selling at Amazon are ignored). For cameras with multiple colors, we use the lowest price (eg black Fuji X100S over silver). A few have non-trivial price differences or availability differences between the benchmark retailers, you can find these cameras mentioned in the Footnotes at the bottom. 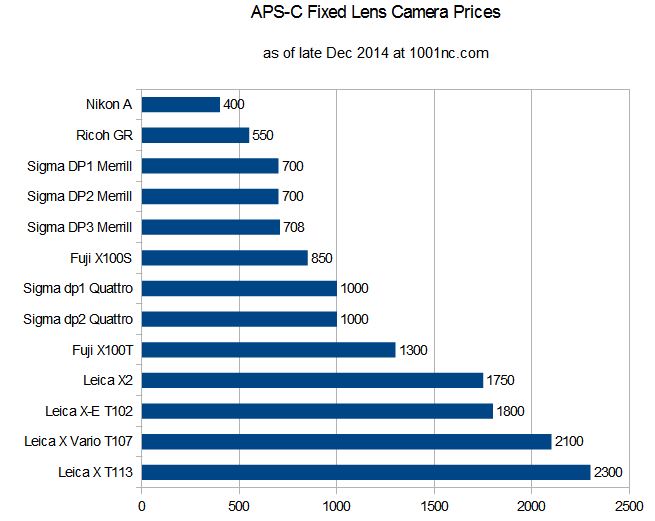 As you can see, Big Sensor Primes (BSP) dominate this segment. After stubbornly holding on to four figures, we now have multiple BSPs not only in triple figures but as low as $400. Granted, they are older models, but still, it’s an APS-C sensor with a custom-matched lens glued to it. If you remove the niche within a niche (Sigma Foveonesques) and boutique (Leica), just four cameras remain in this segment. 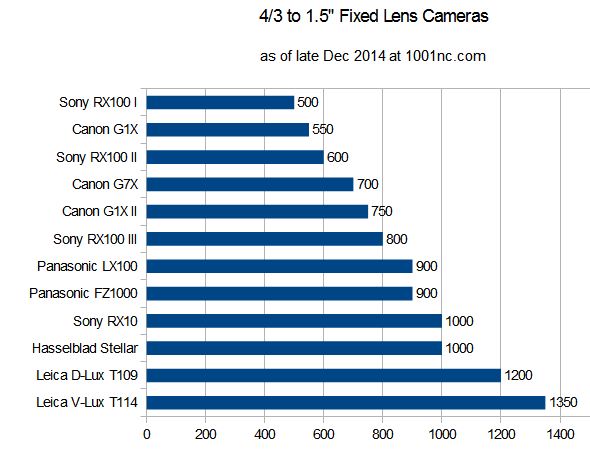 While APS-C is dominated by Primes, zooms are the name of the game here, a Sony vs Canon vs Panasonic battle, with the other manufacturers, for various reasons, not competing at this fixed-lens-camera sensor size (eg Nikon has the 1-inch 1-System). 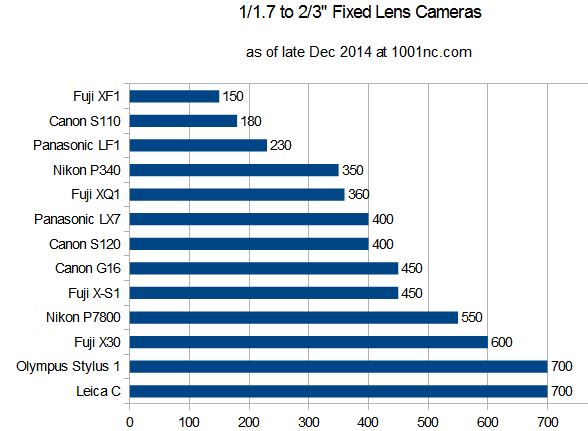 Once upon a time photographers with 1/1.x” compacts with RAW where dreaming and hoping and begging and pleading for cameras of this kind but with larger sensors. Many of those dreams came true, but I should point out, nightmares are dreams too 🙂

Zooms rule the day here as well, with more manufacturers participating with at least one readily available camera model. Sony is the notable absence partly because they are focusing on the 1-inch Sony RX100 series. 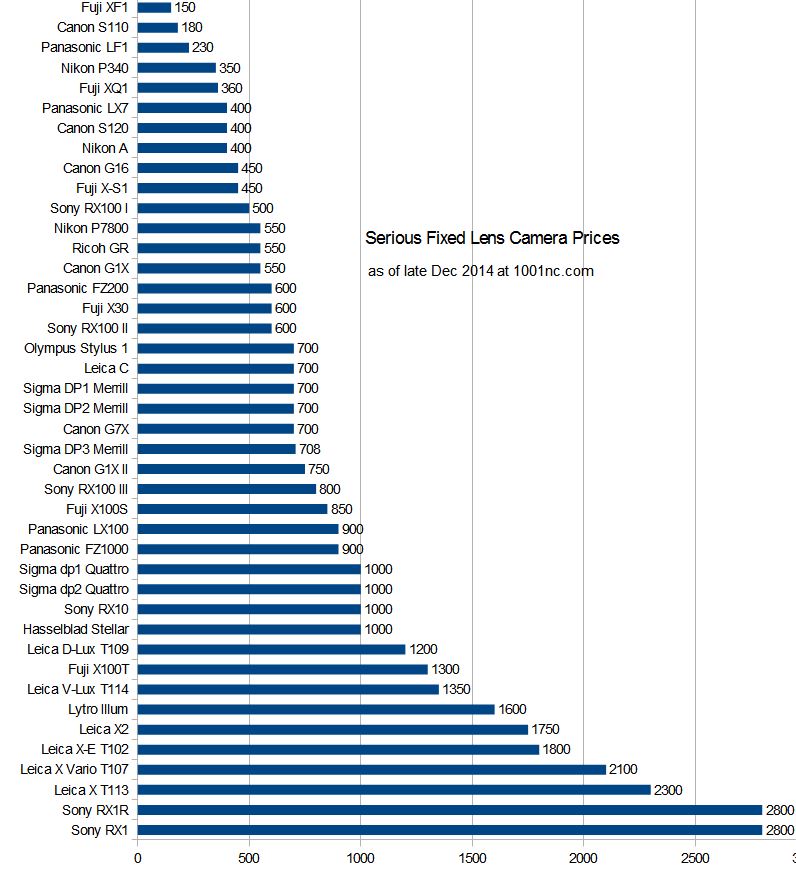 Mega chart above (to see at bigger size, “View Image” in browser), as you can see, there are plenty of cameras, with at least one order of magnitude in price range, ranging from $150 to $3000, from 1/1.7″ to 35mm full frame. As you can see, the top of the price range has a lot of niche (35mmFF, Foveon, Lytro) and boutique (Leica, Hasselblad) options.

Not every single camera with RAW is included above, simply because there are too many of them, and the chart is already barely readable as it is. Not to mention that some cameraphones (and mayhaps some tablets) can shoot RAW one way or another.