Part II of our July 2017 “Price Charts” series is here, focusing on APS-C DSLRs. Other cameras with APS-C size sensors will be listed in their appropriate categories, either Mirrorless or Fixed Lens Cameras. Yesterday we covered the 35mm Full Frame Cameras (all kinds, not just DSLRs). They are grouped like this to keep the groups at a manageable size and logically meaningful.

The prices are the consensus prices between Amazon and B&H Photo and Adorama as of July 4th in 2017. These are new condition with USA warranty prices, from authorized dealers.

All the prices are the body only kit prices for cameras that officially have this option. Some entry-level APS-C DSLRs do not have official body-only kits (or no longer have them). Fro those, I am including their lowest priced kit (typically the “with 18-55”). Older cameras that are no longer available in new condition with USA warranty from the above retailers, or are available in a very limited fashion, are not included.

The increasing number of Full Frame cameras and the popularity of mirrorless cameras have not killed the APS-C dSLRs as some doomsayers had been predicting through the years. The APS-C market continues to add new models, with multiple Canons and Nikons, along with the Pentax KP.

The six new DSLRs introduced this year have their name in the chart below in yellow highlight. The yellow highlighter also tells the story of where most of the action is these days in the world of APS-C DSLRs. The days of the tooth and nail battle for the entry level are over, both Canon and Nikon are in cruise control of status quo models.

The death of more advanced APS-C DSLRs was another thing full frame doomsayers had been predicting, but it hasn’t happened either. Both Canon and Nikon continue maintain a “DSLR price staircase” almost up to $2000. Pentax has their unicorn full frame DSLR, but they still introduced a new four figure APS-C model.

We have a new price leader this year. Thanks to a $100 price increase of the Nikon D500 and a discount of the Sigma SD1, the Nikon D500 is now the Price Leader. Last Year, the roles were reversed, with the Sigma SD1 Merrill Foveon leading the $way$. 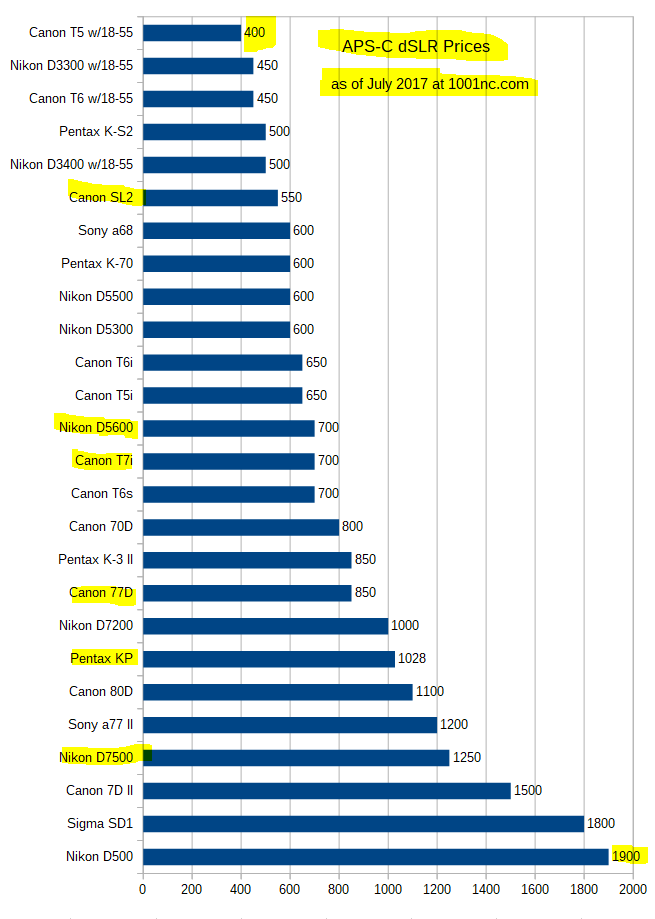 The chart below only shows “Take Pictures With” kits. These are the official “DSLR with Lens” kits. We include the lowest priced kit for each camera, typically the “with 18-55 kit”. I am capping the table below to $700, as it intended to show how much first-time and entry-point buyers are expected to pay for a “take pictures with” kit. 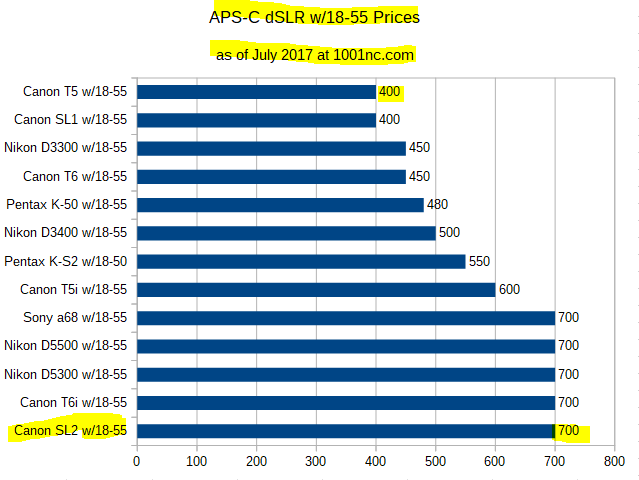 There was only one new camera in this section, the $700 Canon SL2 with 18-55, that’s why there’s only one yellow highlighter on the left hand side. As you can see, there are not that many spring chickens in the list. In terms of buyers, these are also competing with manufacturer refurbished options of themselves along with the used market. All reasonable options considering the current market.