And now we have a new entry in our Price Charts series. It is an APS-C interchangeable lens camera civil war! DSLRs vs Mirrorless cameras! How do the prices compare? Who has more options in the market? Details at 11 (okay, right below)…

This chart uses the data collected for the APS-C dSLRs and Mirrorless Cameras as set forth in those two posts. No new data was collected for this post (in case you are wondering why some cameras are body only, and some are with kit lenses).

THE ASP-C COUNT (Number of Cameras)

This is the number of cameras in the two charts below (under $1000 and over $1000). If you are recounting, make sure you don’t count the D7200 twice since it appears in both charts.

There are so many cameras out there in this segment, we split the chart in two pieces. Under $1000 and over $1000. To make it easier to visually absorb the data, DSLRs have their name highlighted in yellow. This also makes it easier to spot clusters and patterns as you go up the price ladder. 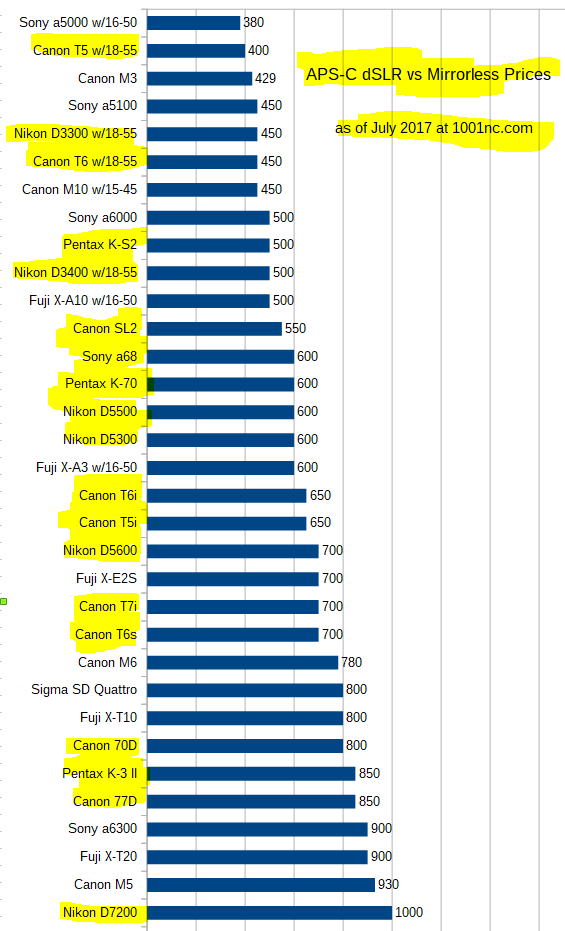 The bottom price tier is competitive with both DSLRs and mirrorless cameras getting interleaved. As we go the middle ($550 to $700), we have a DSLR-heavy cluster, and above that, up to $1000, it’s mirrorless time, as different manufacturers price-position their enthusiast models.

And now to the over $1000 price range. The Nikon D7200 is included in both charts as a visual anchor to virtually stitch together the two data streams. 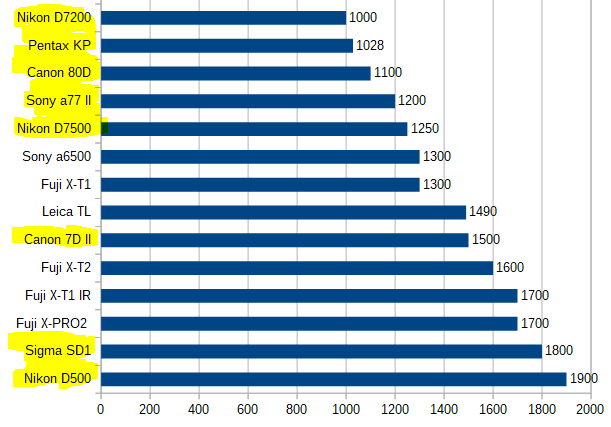 A mild surprise, if not a shocker here, a Leica camera is NOT the most expensive one of the lot! Their both DSLR and Mirrorless APS-C cameras that cost more than the Leica entry. My-oh-my 🙂

Nikon is pricing their APS-C top tier higher than Canon at the moment, which of course could easily change when newer Canon models come out. On the mirrorless front, Fuji is out-pricing Sony, but Sony has a wild line-up of 35mm full frame cameras to compare in terms of price, while Fuji’s next stop price-wise is their GFX medium format system. So it makes sense for Fuji to be pushing up their prices.

This chart, as in previous installments, only includes kits that include a lens with them. A “take pictures with” kit. This is something a beginner in a particular system would buy, because it’s hard to take pictures without a lens 🙂

Just like above, the DSLR names are in yellow highlight to make it easier to distinguish. Once upon a time it may have been easier to distinguish simply by the names, but it’s getting more complicated now with multiple companies having both mirrorless and DSLR line-ups.

You don’t need to do a count or recount here, there are more DSLRs, and they seem to cluster at the top and bottom of the price chart, with mirrorless in the gooey middle. While cameras are not smartphones, there are some pretty old DSLRs at the bottom price tier. But all three of the major APS-C mirrorless manufacturers have $500 or less options, with Fuji perhaps deciding that it can’t win a price war with Sony and Canon.

One fun exercise you can do if you want to have some hypothetical fun is to look at the price-ranges and compare how much of a camera you are getting compared to its neighbors. For example, if you jump in at $700, what are your trade-offs? Do any cameras stand out as bang-for-the-buck? Do others stand out as overpriced?

Please feel free to opine or think out loud in the comments if you like!

This is the first time we have introduced this comparative chart!