We continue this mid-November 2015 Price Charts series with Mirrorless interchangeable lens cameras. Rangefinders are not included in this since they are their own category and their prices are in the stratosphere and they are already included in Episode #1, 35mm Full Frame Digital Cameras. Then in Episode II, we took a look at the prices of APS-C dSLRs.

Where Does The Data Come From?
The prices are the consensus prices between Amazon and B&H Photo and Adorama as of November 19 in 2015. These are new condition with USA warranty prices, from authorized dealers. There are no mail-in rebates this time around. Older cameras that are no longer available in new condition with USA warranty from the above retailers are not included.

We start with the Flagship price comparison. We have a new champion. In December 2014 Sony lead the way with the $2500 a7S. This time around, Leica has taken a commanding lead with their new 35mm full frame mirrorless system, with the $7450 SL Type 601. Sony moved the price-chains forward as well, their flagship is now at $3200 with the a7R II. The other companies have the same flagship cameras as last year, and their prices have fallen.

The Growing World of Mirrorless
With the flagships out of the way, let’s take a look at the ever-increasing world of mirrorless cameras. There were so many I had to split the chart in two charts. For the two charts below, we include the body-only price of a camera if it has an official body only kit (you will see the camera’s name there, eg “Olympus E-PL6” in the chart below). If a camera does not have an official body-only kit, we include the lowest priced kit (eg “Nikon S2 with 11-27” in the chart below).

As you can see below, there is a continuum in prices, starting in the low $200s and slowly but steadily going up. While logically one would think that sensor size would have a big impact on prices, looking at it below, factoring in the 1-inch Nikons, the M43rds and the APS-C sensors, we can see that sensor sizes and prices are not always interlinked. 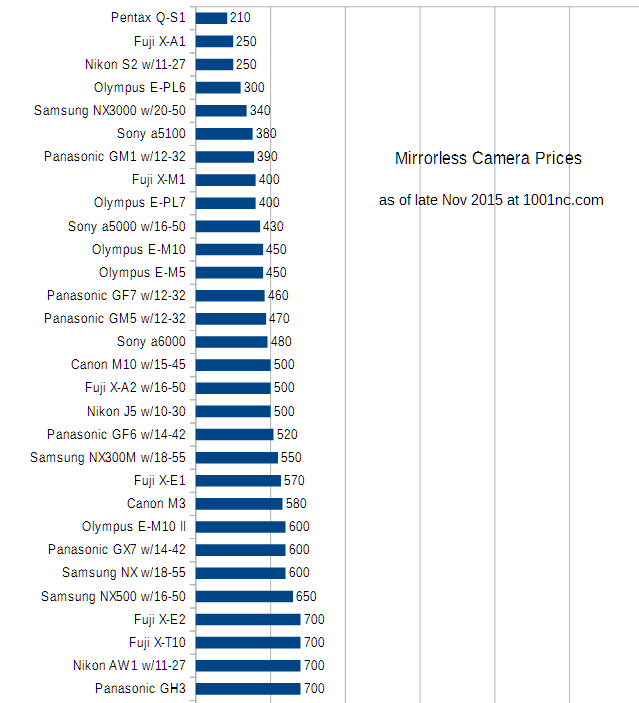 The Panasonic GH3 body only is included in both charts so you can virtually stitch them together. It is also a good point to split the two, as we start getting more advanced features in the group below, with the first 35mm full frame camera appearing at $1100 (Sony a7). The highest priced M43rds camera is at $1300 (Panasonic GH3), while the highest priced APS-C is at $1700 (Fuji X-T1 IR). The Leica SL Type 601 (which you can see in the Flagships chart at the top) is not included in this chart because it would significantly compress the scale, making the rest of the entries unreadable. 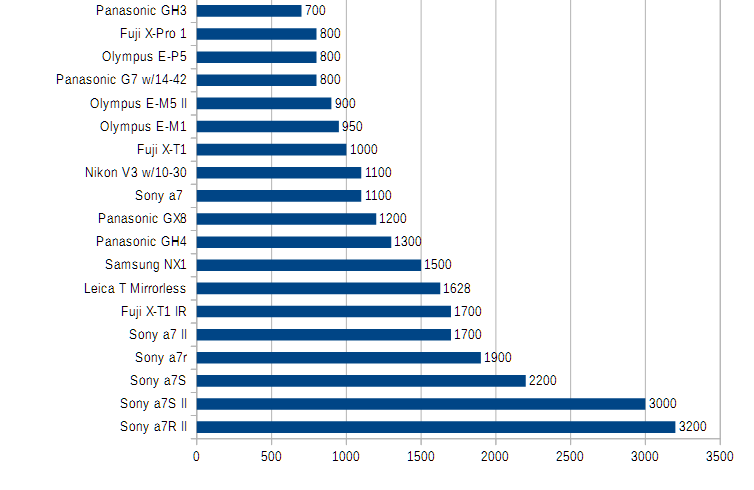 The “Take Pictures With” Kits
The above are the lowest prices of each camera. The chart below captures the lowest prices of “take pictures with” kits. In other words, official kits that include a camera and at least one lens. These are often purchased by someone new to a system or as a first interchangeable lens camera. 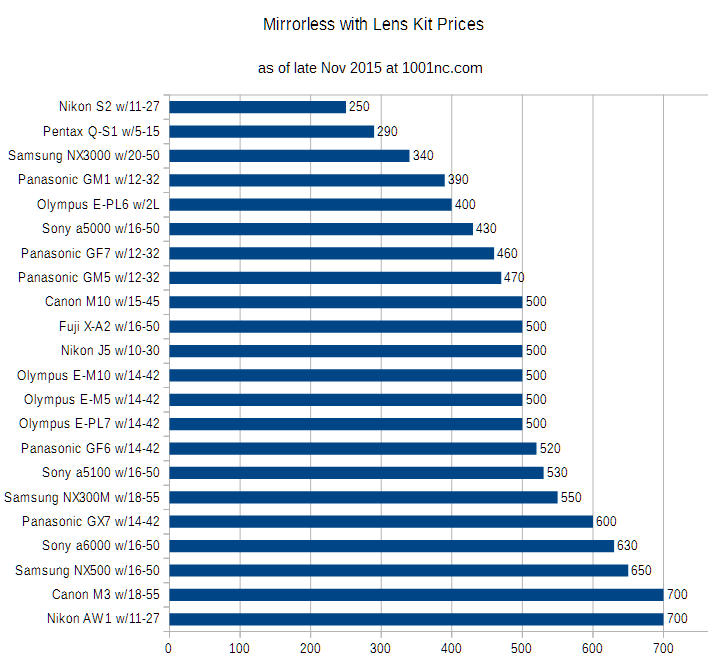 When you compare this to the December 2014 chart (the last one over there), one observation is that the race to the bottom (price wise) has cooled off, and now the battle is more in the middle. A few of the camera kits even have higher prices now than they did last year. It is perhaps not a coincidence that Canon’s two new mirrorless take-pictures-with kits are at $500 and at $700.

One thing that stands out in this chart, given the easing of the race to the price bottom is the new Olympus E-PL6 two lens kit for $400, a Costco-style bang for the buck type of a kit.