This is the biggest of the Price Charts, with the most cameras and most charts too! It’s mirrorless time! They are after all “winning” 2017 by a score of 12-8 vs DSLRs. A field goal can no longer tie the game 😉 This is episode #3 in the November 2017 series.

GOODBYE NIKON 1 SYSTEM from the PRICE CHARTS
With this edition, we have a change in coverage. Even though Nikon’s 1-System cameras still remain at enough of the tracked retailers, I decided to remove them from this and future Mirrorless price charts because:

+ it’s a dead system
+ there is no movement in the prices
+ given their situation, they are more noise than signal

NEW VISUAL ELEMENTS in the CHARTS

New cameras that have been officially announced since the previous edition of the Price Charts have their name highlighted in yellow highlighter in the actual charts. 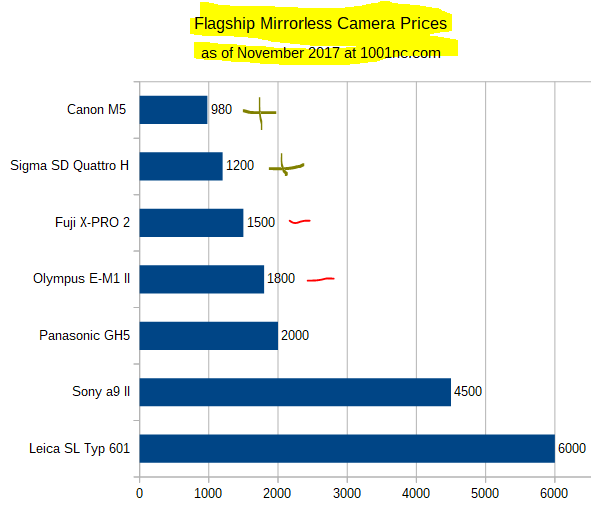 The flagship chart is unchanged since last year. Both Sony (a7r III) and Panasonic (G9) and Leica (TL2) released new “deputy” flagships, but price-wise the Sony a9 and Panasonic GH5 remain the leaders. Some could argue that the G9 is the photographic flagship in the Panasonic M43rds line-up, but these are price charts 🙂

Discounts are tied with price increases. Both the Olympus E-M1 II (just recently) and the Fuji X-PRO 2 dropped in price. The X-PRO 2 currently has the same price as the X-T2 but I only include one flagship per manufacturer. On the price increases, the Sigma SD Quattro H went up by $200, while the Canon M5 went up by $50.

There are so many mirrorless cameras I had to break the Price Chart in two. As usual, it is sorted by price, and with the new visual elements signalling price increase or decrease since the previous update. The Olympus PEN-F is the constant, it’s at the bottom of the first chart and the top of the second chart. The virtual clue that stitches them together 🙂 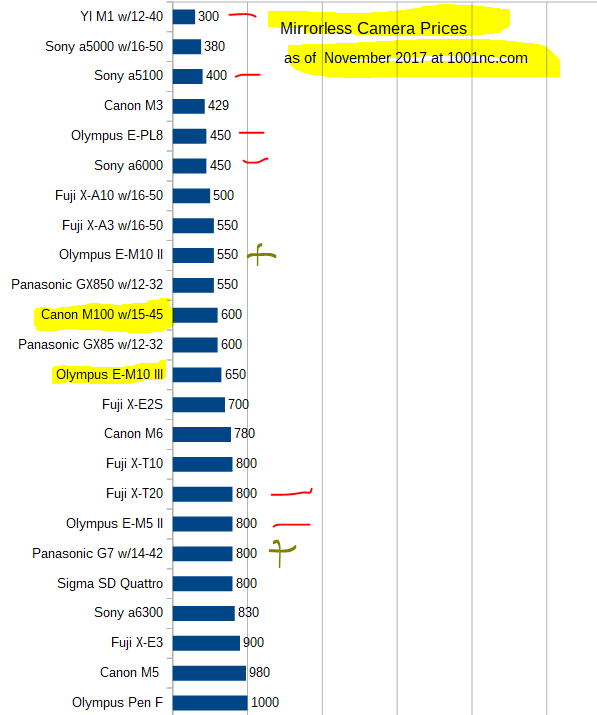 We being with the sub-$1000 segment [click on the picture above or the direct link to the full size image] where we have two entries, the third generation Olympus E-M10 and the Canon M100 mirrorless kit.

The overall theme of this segment is price drops, headlined by Olympus and Sony. The two increases may have been strategic, both Olympus E-M10 II and Panasonic G7 “defending” the price point as they released newer and more expensive models (E-M10 III, G9 respectively). Companies sometimes use price adjustments to try to encourage customers towards newer models. For example, the Fuji X-T1 was going for $800 with a free lens, but when newer X-models came out, the X-T1 price skyrocketed, to nudge photographers towards the newer models.

Despite having multiple players though, the price drops are more of aging models, here too we have a competitive truce between the major manufacturers.

And now we go to the four figures mirrorless that will leave you walletless 😉 Click on the image below for a large size or go directly to the full size image. 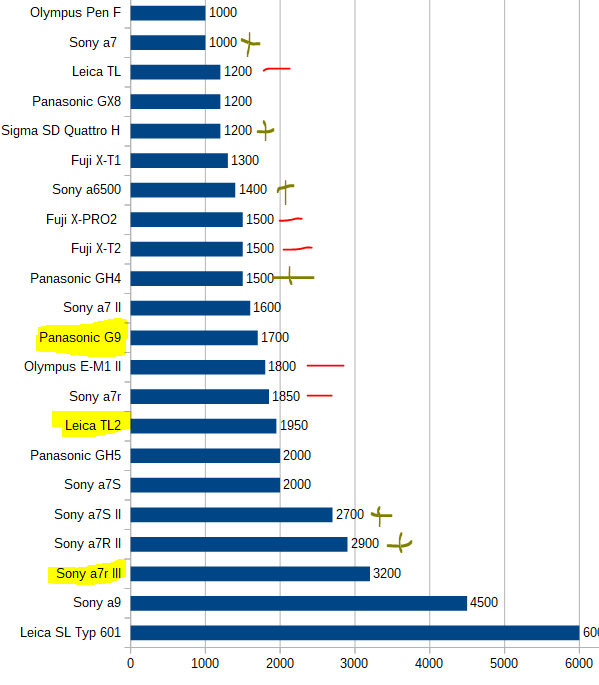 The entry-point of 35mm full frame mirrorless increased to $1000 [last mirrorless price chart had a $950 entry-point] with the good old Sony a7. Yes, the first generation model, it is still sticking around at all tracked retailers.

Fuji is the main discounter here with both the X-PR0 2 and X-T2 going down, and now sitting together at $1500. Sony’s prices went up, as did the only APS-H mirrorless (Sigma SD Quattro H). The Olympus E-M1 II got its first official discount last week, while the Panasonic GH4 went up in price, perhaps part of the price triangulation to encourage more photographers towards the G9 and GH5.

I limit “taking pictures with” kit prices to $700 for the purposes of this chart. That’s why the Panasonic G7 is gone from the cart below because it jumped to $800. 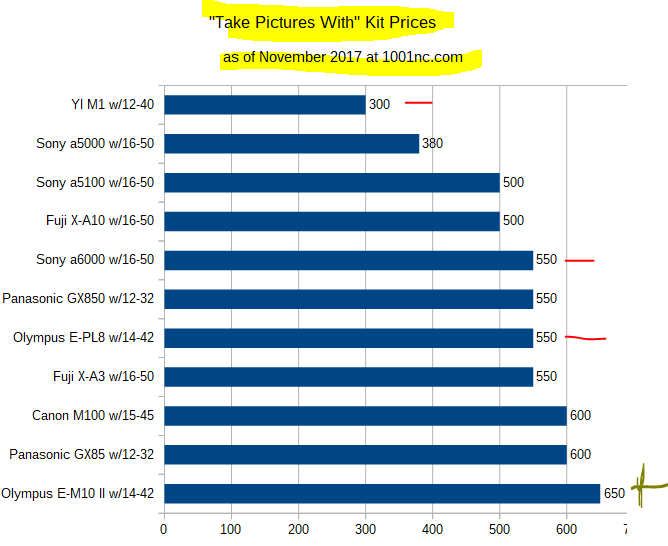 As with previous charts, there is not a whole lot of price competition at the bottom. YI Technologies is the newcomer, and they dropped $50 since, but the major manufacturers are refusing to engage in a price war. The two M43rds parents for example have given up on entry-level prices even though they use a smaller sensor system. Even Canon who is the relative newcomer is not in a hurry to compete on price, even though they have a few overlapping models.

The prices are the consensus prices between Amazon and B&H Photo and Adorama as of November 6-8 in 2017. These are new condition with USA warranty prices, from authorized dealers. All the prices are the body only kit prices. Older cameras that are no longer available in new condition with USA warranty from the above retailers, or are available in a very limited fashion, are not included.