We are back today with Day #2 of this incarnation of the Price Charts series, taking a look at APS-C DSLRs!

NO ALARMS AND NO SURPRISES

To see the full chart, click on the picture, or use the direct PNG link. 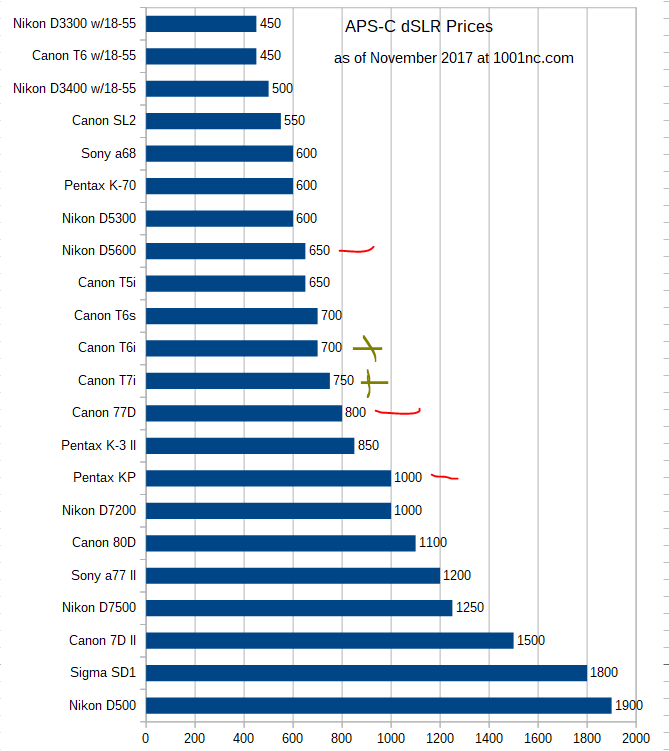 We have no new entries since the previous edition, so that’s why you don’t see any camera names highlighted in yellow. With Sony focusing on the E-system, and Pentax being Pentax, it’s not a surprise, since Canon and Nikon have fully stacked line-ups as you can see from the staircase pattern. So much so that it’s more or less the same DSLRs that get featured in multiple years in the Black Friday Ads. Not a sign of a competitive market like you see with smartphones. It looks more like a competitive truce 🙂

The price movements, both up and down have been of the $50 variety. The Canon 77D discount may have been triggered by price bots.

The Canon D-Rebel T5i stands apart in this edition of the chart as the only camera whose body only kit is actually $50 more expensive than their kit with the 18-55 lens [see “Take Pictures With” section below]. The same thing was so in the July 2017 edition [links at the bottom of the post].

Nikon too has unusual situation. The D5500 is not available in new condition at authorized dealers. There are imported and refurbished units but not new condition. That’s why you see the older D5300 but not the D5500. A list of all the “departed” cameras is under the “Notes and Footnotes” segment.

I limit “taking pictures with” kit prices to $700 for the purposes of this chart, so the Pentax K70 is a new entry only in the sense that its price dropped from $750 to $700, thus gaining “chart eligibility” 🙂 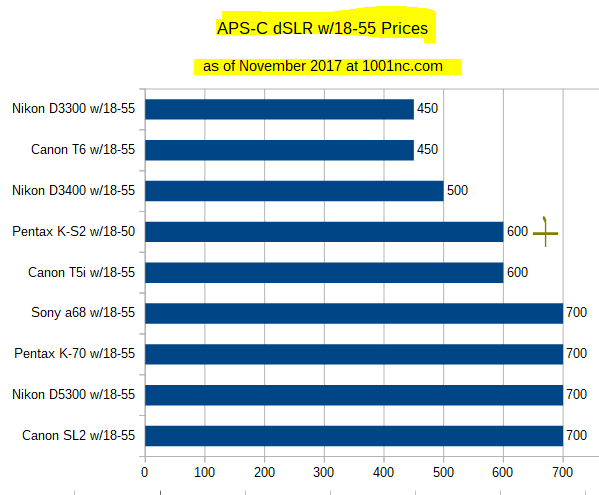 The importance of this chart is that it shows how much one is expected to pay to get a camera kit that takes pictures as soon as they open the box. Sure there are many other ways to get started, but a lot of people’s first camera is a “take pictures with” kit, that’s why I’m including it 🙂

The “competitive truce” is very evident here too, with one camera each from Pentax and Sony, and the usual suspects from Canon and Nikon. The result is that the prices are being held up thanks to MAP restrictions.