This is the biggest one of the groups, it’s Mirrorless time! Already this segment added six new cameras (five of which in 2018 and that was just from three manufacturers).

We have two new entries in the Flagships chart! Both Panasonic and Fuji have replaced their flagships with more expensive models, the Panasonic GH5S was a +$500, while the Fuji X-F1 a +$400 over their predecessor prices in the November charts.

Of the remaining cameras, we had two modest price drops, the Olympus E-M1 II and the Canon M5. Remaining at the same price were the least “mobile” (price wise), the Leica, the Sigma and the Sony leader.

MANY AND MORE MIRRORLESS

Six new mirrorless came out since our last update, but you only see five of them. That’s because the Olympus E-PL9 is not available in the US market and this is a price chart, it wouldn’t make sense to include in the charts without a price.

The new entries are the Leica CL (came out a few days after our November chart), Fuji X-H1 and X-A5 and the Panasonic G9 and GX9. Two mirrorless cameras “left” this chart (became unavailable for purchase at the tracked retailers as set forth at the bottom of the post), the Fuji X-T10 and the Sony a5000 with 16-50mm kit.

Just like previous years, the chart is too huge to post as a unibody, so I’m splitting it in two. The Panasonic GX9 is the “constant”, it’s at the bottom of the first half and the top of the second half. The one that virtually stitches it together… 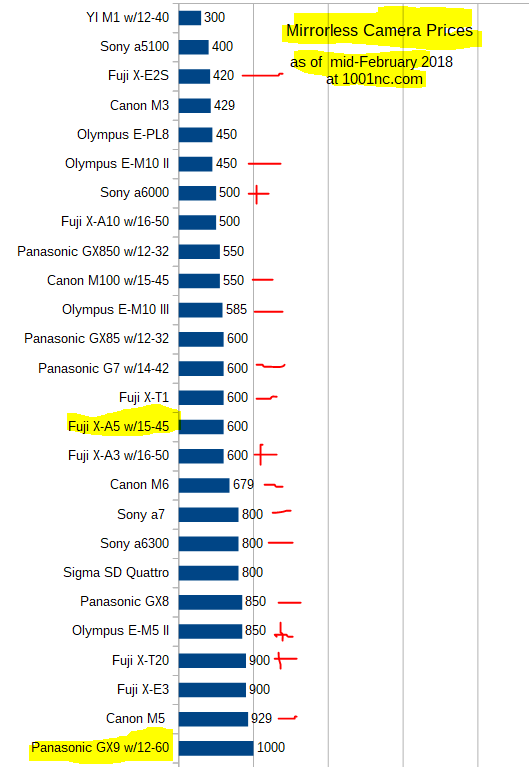 As you can see by the red plus and minus signs next to the camera prices, prices have been a lot more alive and active here compared to the APS-C DSLRs. Price drops overwhelmed the price increases which is typically a healthy thing to see in a market of digital products. Even the price increases were not quite that bad, the X-T20 went up to $900 but the kit with a lens remained at $900. Looking at the chart, it looks like Fuji increased the price of the X-A3 just to make the just-released X-A5 more appetizing.

But the bottom of the market did not fall out, as you can see the price drops were more in the upper side of $500. The prices shown here at the body only kits (unless a camera doesn’t have one). Check also the “Take Pictures With” chart further down to see what one looking to jump right into a system would be paying. 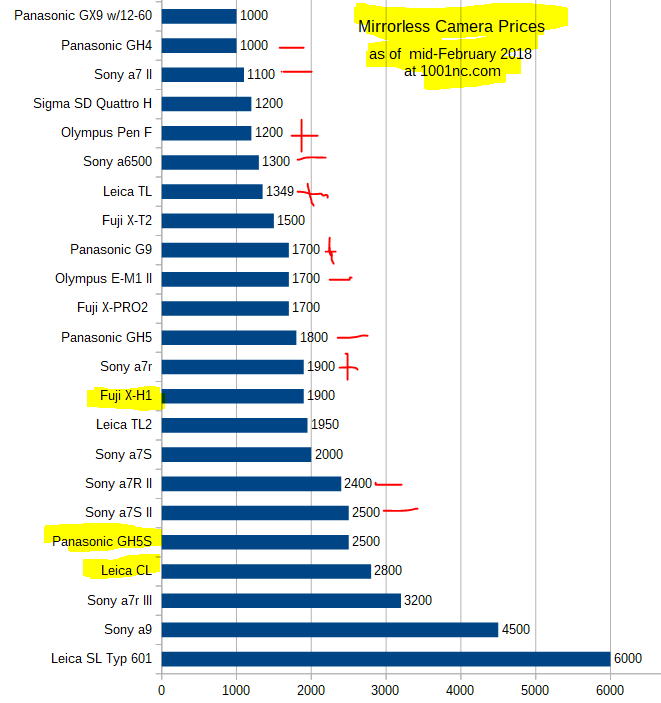 In Part #2 above, it’s where many of the forum battles are fought 🙂 Prices went up and down here as well, with some dramatic drops, like $500 drops for the Panasonic GH4 and Sony a7r II, a7 II. The Fuji X-T1 had an even more dramatic drop of $700, heavily discounted to $600 right now.

The price increases where nowhere near as high, the top was +$200 for the Olympus PEN-F (not sure why) and the Fuji X-PRO2 (mayhaps repositioning with the X-T2).

This chart shows the lowest prices for a camera with lens kit. Only cameras available with lenses are included. The lowest body only prices can be found at the top of the big chart above.

The days of the race to the bottom are over, even though we had a sizeable discount of the Olympus E-M10 II with 14-42. The Panasonic G7 with 14-42 is not a new camera, but it is new to the “Take Pictures With” chart because it dropped $200, putting it under $800 and into this chart 🙂 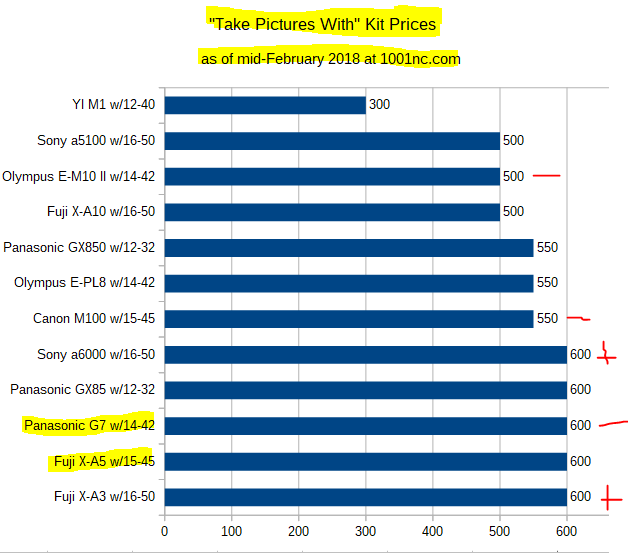 The prices are the consensus prices between Amazon and B&H Photo and Adorama as of February 22 in 2018. These are new condition with USA warranty prices, from authorized dealers. All the prices are the body only kit prices. Older cameras that are no longer available in new condition with USA warranty from the above retailers, or are available in a very limited fashion, are not included.