Part III of our July 2017 “Price Charts” series is here, focusing on Mirrorless cameras of all kinds. Rangefinders are not included, nor cameras with sensors larger than 35mm.

Thanks to one of our readers for the email alert! The Sony a6500 is missing from the charts below! Its consensus price is $1300. It will be added to the chart below when I do a revision by the weekend. I have to double-check to make sure I didn’t forget any other cameras. If there are any others missing, please leave a comment or use the online contact form. I love corrections, don’t by shy!

The prices are the consensus prices between Amazon and B&H Photo and Adorama as of July 5th in 2017. These are new condition with USA warranty prices, from authorized dealers.

All the prices are the body only kit prices for cameras that officially have this option. Some cameras do not have official body-only kits (or no longer have them). Fro those, I am including their lowest priced kit (typically the with 16-50 or with 12-32 or with 18-55). Older cameras that are no longer available in new condition with USA warranty from the above retailers, or are available in a very limited fashion, are not included.

Like previous years, we start with a chart that has the flagship (in terms of price) for each of the mirrorless systems that have active cameras. We had three new flagships this year, highlighted in yellow below, the Panasonic GH5, the Sigma SD Quattro H, and the Sony a9 II which pushed upwards Sony’s flagship prices from the Sony a7R II last year. 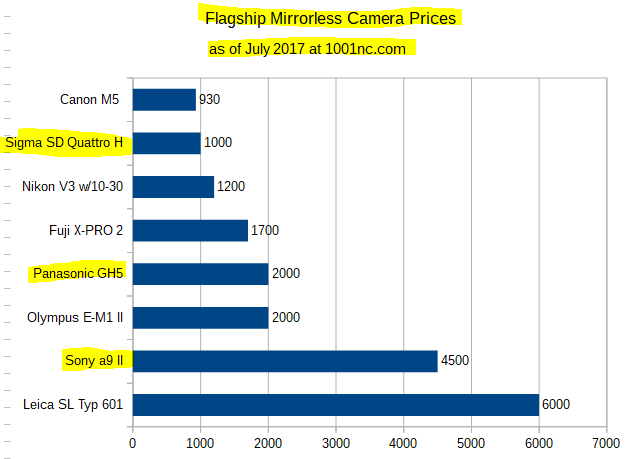 Flagship prices are very stubborn, all the remaining flagships from last year have the same price, except for the lowest price one that dropped $50, the Canon M5.

The Nikon V3 may be odd to see here, but it is readily available at all three of the tracked retailers, that’s why it’s included here 🙂

Yikes, look at this mega chart. So many mirrorless cameras out there! Click on the picture below to see the full size, or open it directly and then use your browser or imaging software to zoom and zoom and zoom until you get it to an agreeable size. 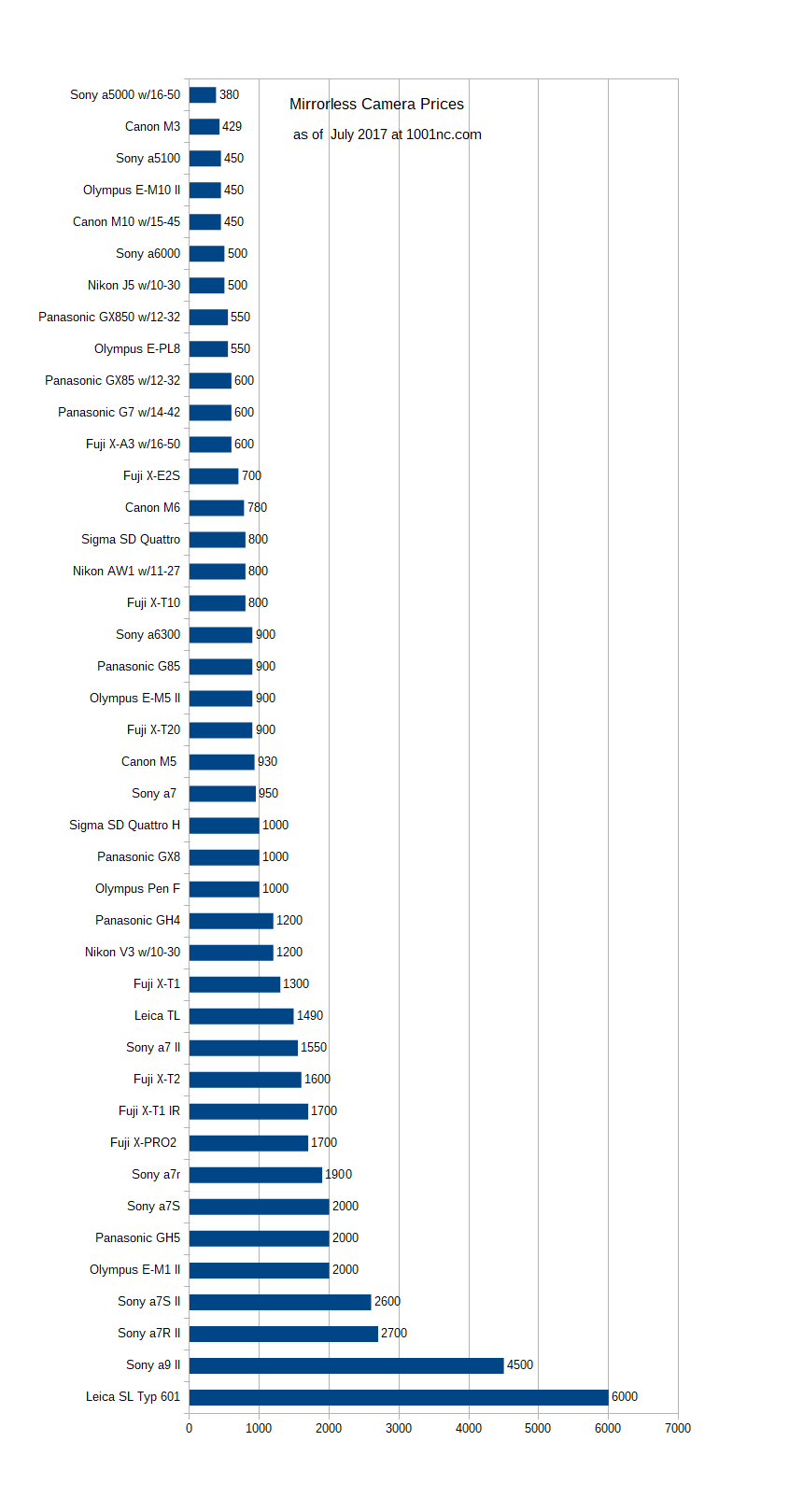 We have a price staircase from $380 all the way up to $2000. After that, it is less so. It is rather fascinating how the chaotic randomness of pricing of so many cameras looks so …organized.

With the Pentax Q-S1 finally out of stock, and the Nikon 1-System on its last legs (but still available at retail), sensor sizes are increasing on average. We also have an APS-H option in the new Sigma SD Quattro H. We don’t track anything larger than 35mm FF in these charts, but Fuji launched the GFX system as well.

But sensor size does not dictate pricing. The Olympus E-M1 II and Panasonic GH5 are in the Top 6 most expensive cameras even though they have a M43rds sensor. Likewise, the Sony a7 is a 35mm full frame camera, but cameras with all kinds of smaller sensor sizes cost more than it does.

With so many cameras, it’s not a surprise to have cameras from different manufacturers have the same names. Olympus and Canon both have M5 and M10 models 🙂

It is rather interesting that we had new cameras from both niche systems and mainstream systems since the previous update in November 2016. On the more niche front, there is the new Leica TL, the new Sigma Quattro H (yes, APS-H), and another Canon EF-M in the M6. Panasonic added the GH5 and GX850, Sony went high up with the a9 II, and Fuji added the X-T20.

A number of cameras from the previous chart are now gone, including the Olympus E-P5 (only available at one of the three retailers in limited fashion), the Leica T, and a quarter of Fujis in the X-PRO 1, X-A2, X-A1, and X-M1. More goodbyes from Olympus, the E-M1 and E-M10 (first generation), along with the E-PL7. The other side of M43rds had its goodbyes too with the G5 and GM1, along with the GX85 body only (the GX85 w/12-32 continues). Last but not least, the remaining inventory of the good old Pentax Q-S1 is now gone 🙂

The Take PICTURES WITH KITS

This chart is interesting because it shows how much one is expected to pay to get a “take pictures with” kit, often of interest to newcomers to a system, or beginners in interchangeable-lens photography…

I am capping these (just like APS-C dSLRs to a maximum of $700, since at that price, we start getting more into the enthusiast level where other lenses may be preferred.

There’s only one new release since the previous post in November 2016, but there are more additions to the chart simply because some cameras dropped enough in price, while others got discontinued, so it created space for them to be included here. Just like with dSLRs, there is no fierce competition to the price bottom any more. 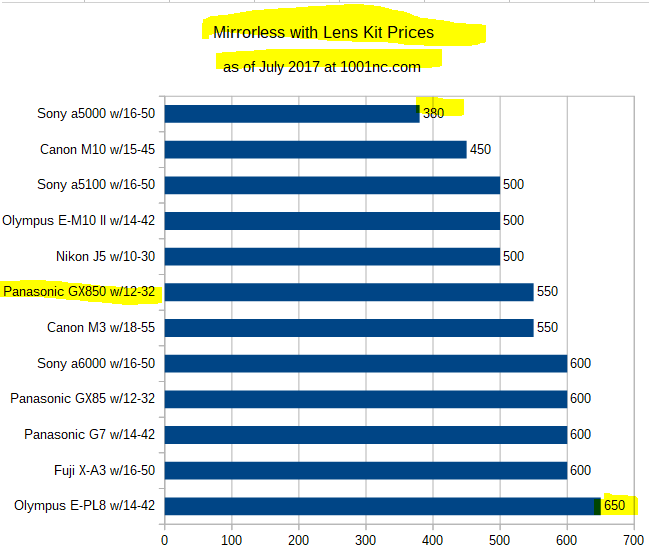